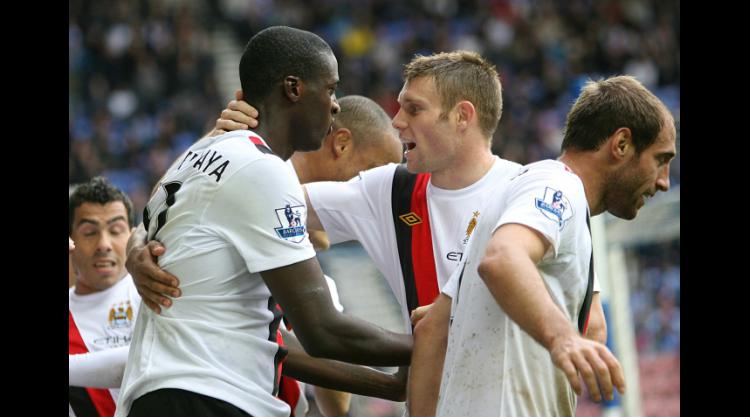 Carlos Tevez inspired Manchester City to shrug off their sluggish start to the season as they beat Wigan 2-0 at the DW Stadium.

Superb Tevez struck City's opener out of nothing in the 43rd minute after Latics defender Mohamed Diame back-headed a long goal kick from Joe Hart into his path.

And he set up Yaya Toure's first City goal after 73 minutes when he seized on a weak defensive header by Maynor Figueroa to cross for the Ivory Coast star to prod home.

Wigan keeper Ali Al Habsi had been a virtual spectator until Tevez hit his opener and the result was hard on Roberto Martinez's men who matched their opponents for long periods.

While their own chances were few and far between the same could be said for City who - Tevez apart - carried precious little threat in the final third of the field.

City had started with plenty of purpose, with Richards lucky to escape a caution for a careless challenge on Figueroa, then Tevez ruled just offside after being set through by Milner.

When a Richards cross was half-cleared the ball fell to Tevez who scooped high and wide on a slippery surface which made conditions difficult for both teams.

Tevez came close to giving the visitors a 14th-minute lead when he ran at the Wigan defence before hitting a low shot from long range which flashed just wide of Al Habsi's right-hand post.

Wigan almost fashioned a chance after 23 minutes when Nigel de Jong gave the ball away to Figueroa who blazed down the right only to see his attempted cross cut out by Vincent Kompany.

With City struggling to fire, Wigan began to enjoy more possession and had their first shot on target on the half-hour, when Di Santo skidded a low shot from the left into Joe Hart's arms.

Pablo Zabaleta fired over from 20 yards for City who were often being made to look second-best in midfield by a home side who harried for every ball.

City's opener had a great deal of fortune about it as Hart's deep goal-kick struck Diame and Tevez nipped in to loft the opener gently over the advancing Al Habsi.

And City came close to extending their lead in the first minute of the second half when David Silva made space on the right and crossed for Tevez, who mis-kicked in front of goal.

City certainly seemed to have much more purpose about them and that was underlined by a jinking run by Tevez which was finally brought to an end in the six-yard box by Steve Gohouri.

Zabaleta hit a shot from a tight angle straight at Al Habsi in what was the Wigan keeper's first save of the match, before Gohouri was cautioned for a late challenge on Tevez.

There were warning signs for Wigan in the 68th minute when Gohouri's slack ball at the back let in Tevez, who rammed his shot straight at Al Habsi.

And it did undo them in the 70th minute when Figueroa failed to head clear allowing Tevez to nip in and loft the ball across the face of goal for Yaya Toure to stab home at the far post.

With the fight suddenly drifting out of the home side Tevez almost added his second in the 74th minute with a left-foot effort that flashed across the face of goal.

And substitute Adam Johnson almost added a third in injury time when his rising shot from the left deflected off Ronnie Stam and hit the bar.