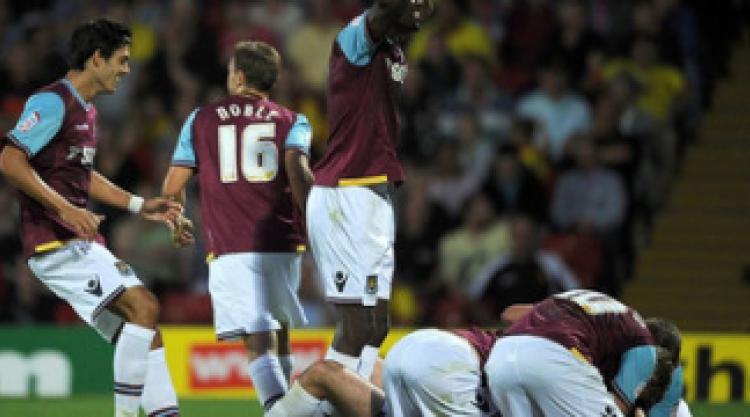 Sam Allardyce was delighted with the quality of West Ham's goals in their 4-0 win at Watford in the Championship on Tuesday night.

The Hammers were quickly on track to follow up Saturday's 1-0 triumph at Doncaster when James Tomkins headed them into an early lead.

Watford pushed for the equaliser - and but for a wonderful save from Robert Green to deny Marvin Sordell they would have got it - but Joey O'Brien's second in first-half stoppage time gave Allardyce's side a firm cushion.

The visitors cantered through the second half without extending themselves, seemingly able to up their game at will and they added to their tally through Carlton Cole and Scott Parker.

Allardyce said: "The pleasing thing for me is how we've won this game. The quality of our goals was something to be admired.

"After we withstood the early pressure from Watford, and obviously the early goal helped, it was how we defended as well, how we never let Watford get a sniff tonight.

"As a manager, you look at both sides of it and two clean sheets on the trot away from home is something I always drive into the players and on the back of that we've gone and then played some great football, particularly in the second half, because we've earned the right to play that type of football.

"That's the most pleasing thing for me - seeing the opposition's threat off early doors, punishing them to the hilt in the end by picking out the right passes in the right places and what I thought might have been an Achilles heel, we've seen some outstanding and quality finishing tonight.

"We've got everything right tonight and for me it's not often you see all your team play what probably is the best they can play and I hope it can get better, but I wouldn't have thought they could get much better than they got tonight."

Watford boss Sean Dyche said: "In parts of the game we played very well, particularly in the first half. We gave away a set-piece goal which, from our point of view, is disappointing.

"The second goal is very disappointing from us. It's a very poor goal, especially at that late stage of the half.

"I read the other day that one of their players earns our total wage bill so that's kind of where it's at and usually if you're going to spend that enormous amount of money you're going to get quality - and the defining moments of the game came due to their quality."

Asked about the timing of the second goal, Dyche said: "I'll check the statistics but I'm pretty sure Scott Loach hardly had a save to make in the first half and I thought we'd worked their keeper well. We had one cleared off the line and then we gave away a soft goal. We have been guilty of that and it's something we're addressing.

"After that they become more clinical. They got the third and then all of a sudden they can look like the team that they probably are, which is full of Premiership-style players."