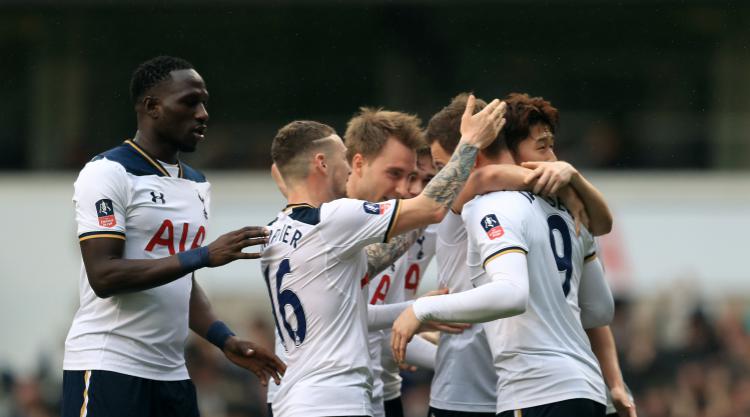 Christian Eriksen and Dele Alli proved there is life after Harry Kane for Tottenham as each player hit the target in a battling 2-1 victory over Southampton.

Kane's absence meant Son Heung-min led the line but it was Spurs' attacking midfielders who filled the void, with Eriksen breaking the deadlock before Alli won and then converted a penalty.

James Ward-Prowse cut the deficit for Southampton after half-time to spark hopes of a comeback but Tottenham held on to reduce the gap on Chelsea to 10 points once more. Saints, meanwhile, stay 10th.

Chelsea's march towards the Premier League title shows no sign of slowing but this win also pulls Mauricio Pochettino's men seven points clear of Manchester United in fifth and nine points ahead of Arsenal, albeit having played a game more than both clubs.

Tottenham have not finished above their north London rivals since 1995 but with 10 games left and the Gunners struggling for form, their lead appears formidable even given Spurs' tendency to experience an end-of-season slump.

Son was not at his best but with Alli now scoring four goals in four games and Eriksen three in five, perhaps Tottenham can rely on their midfield to replace the goals Kane would otherwise provide.

They also remain unbeaten at White Hart Lane this season, since Southampton won 2-1 here in May last year.

Claude Puel lost his own star striker when Manolo Gabbiadini hobbled off in the 32nd minute - the Italian is now a doubt to join up with his national team over the international break.

Son, fresh from his hat-trick against Millwall last weekend, was preferred up front to Vincent Janssen and the South Korean was involved from the off as Kyle Walker's clipped ball-in-behind evaded Maya Yoshida, but his first-time shot was palmed away by Fraser Forster.

Both sides were eager to deny the other time and space early on, with passes fired out of play and rushed clearances handing away possession.

But in the 14th minute, Eriksen delivered a rare moment of precision, drifting onto Mousa Dembele's pass before bending a left-footed shot hard, low and into the bottom right-hand corner.

Southampton threatened as Gabbiadini's first-time's shot brushed the side-netting and Dusan Tadic somehow blasted over from seven yards, when Nathan Redmond had done well to pull the ball back off the line.

With half-an-hour gone, however, the visitors were dealt two crushing blows in three minutes, as first Gabbiadini was forced off injured and then Alli doubled Tottenham's lead.

Gabbiadini's exit was a cruel blow but the goal was very much of Southampton's own making as three players made a mess of trying to clear before Alli nicked the bouncing ball ahead of Steven Davis and was brought down.

The midfielder duly rolled the penalty home for his 18th goal of the season.

Shane Long replaced Gabbiadini and, with both teams now without their star strikers, it was the visitors who pulled one back seven minutes into the second half.

Ryan Bertrand fired a ball in from the left and, as Toby Alderweireld kicked the air, Ward-Prowse was able to bundle it in at the back post.

On the touchline, Puel thrashed his arms in delight and his side, who had looked all but finished at half-time, were now dragging Spurs into a dogfight.

Harry Winks and Victor Wanyama were left scrapping for second balls in midfield and Tottenham fans' groans grew louder as their team gradually lost grip of their earlier control.

But without Gabbiadini, Southampton's attack was blunted. Sofiane Boufal's shot, flying just wide of a post in stoppage time, was the closest they came as the hosts held on for a hard-fought victory.