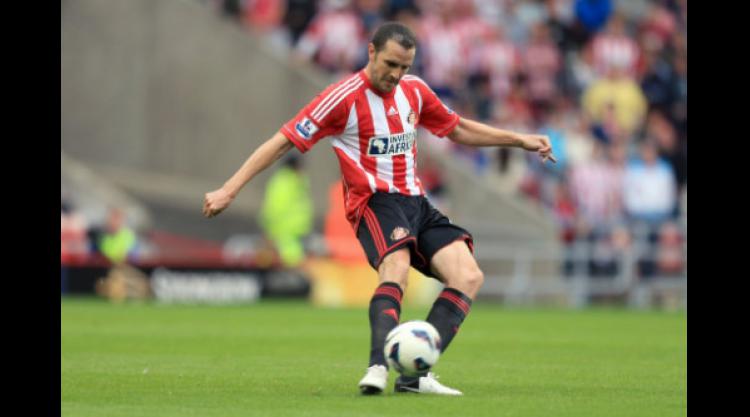 John O'Shea has called upon his Sunderland team-mates to stand up and be counted as they attempt to avoid being dragged into the thick of a relegation scrap.

The Black Cats remain six points clear of the Barclays Premier League basement battle despite having taken a paltry two points from their last six games.

However, Sunday's clash with Norwich, who are three points better off, signals the end of a sequence of fixtures against sides in the lower reaches of the table and heralds the onset of a run of games which will see them face Manchester United, Chelsea and Everton either side of a derby trip to fast-improving Newcastle.

In the circumstances, victory over Norwich would go a long way towards easing their fears of being sucked into the mire below with last weekend's conquerors QPR and Aston Villa in particular starting to rally.

Asked if that piled the pressure on Sunderland's shoulders, 31-year-old O'Shea said: "As professionals, it shouldn't do. Why should it?

"We are more than capable of scoring goals in the last 10 minutes as well as the first 10 minutes.

"It's going to be important on Sunday that the players stand up with bravery and composure and the attitude to come and take the ball, come and want to play, want to play football and not hide and shy away from the challenges that we face."

Should the Black Cats fail to collect the three points on offer this weekend, they would be left looking uneasily over their shoulders and with a daunting series of matches ahead of them.

However, just as O'Shea will take nothing for granted against Norwich, he refuses to accept that the Black Cats should write of the possibility of emerging from their clashes with United, Chelsea, Newcastle and Everton empty-handed.

He said: "That's one of those things. If the Premier League worked like that, everyone would have their points worked out before the start of the season and we could all pack up and go on our holidays.

"Everyone likes to predict they can take points here or take points there, but it never works like that.

"Every game has its own individual facts and bases to go from and that's what we will be doing on Sunday, and then you deal with one game at a time."

The full-back returned to first-team action as a substitute in last weekend's 3-1 defeat at QPR and reported a little tightness in the hamstring which had sidelined him for the previous two games, although he is expected to be available.

Striker Connor Wickham has returned from his loan spell at Sheffield Wednesday, but winger James McClean, who missed the game at Loftus Road through illness, remains a doubt.

Norwich boss Chris Hughton has called for his side to quickly accumulate the points required to ensure Premier League survival.

The Canaries have 33 points ahead of Sunday's match at Sunderland and, in a congested lower half of the table, Hughton hopes his side control their own fate in the final nine matches of the season.

"It's about looking after your own business," Hughton said.

"You hope that if you're able to get good enough results you don't have to worry so much about other results.

"We're all in there fighting; everybody's desperate to get points.

"It is a tough part of the season where you can get unexpected results. There is so much football to be played still.

"Everybody has objectives at this stage of the season, and as the games are ticked off it's even more important you're in the position you want to be in."

Norwich have just one win in 12 Premier League matches - against Everton last month - and one away success all season.

The Canaries, who have kept nine clean sheets this term, to the delight of Hughton, have drawn four of their last six, including last week against Southampton when Grant Holt was unsuccessful with a late penalty.

"We've tried to address that of late, but we're striving to get balance," Hughton said.

"We have had a lot of clean sheets, which is really pleasing, but we've also had a few games where we've let in a few goals. On three occasions we've let five goals in.

"But I've been delighted with how we've been as a team defensively, but we've got to make sure going into these nine games we're giving ourselves an opportunity to win games.

"There is that difference between drawing games and the three points you'll get from a win. We need to make sure we win enough games."

Republic of Ireland forward Anthony Pilkington faces two to three weeks out with a hamstring injury and will miss out for Norwich.

Pilkington came off in the first half of last weekend's 0-0 draw with Southampton and was forced out of Republic duty.