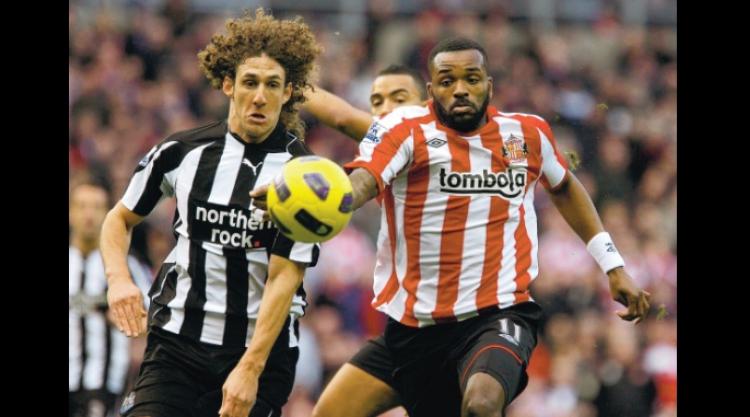 AS the clock ticked past the 90-minute mark in yesterday's Wear-Tyne derby, Steve Bruce was staring down the barrel of his most damaging result as Sunderland manager.

Forget losing 5-1 at St James' Park, forget crashing out of the FA Cup at the hands of Notts County. If you're the manager of the Black Cats, you don't suffer a home defeat to Newcastle, particularly one as deserved as yesterday's would have been, and not expect there to be serious repercussions.

Eight days after losing to one set of Magpies, Sunderland were on the brink of losing to another. It is no exaggeration to say their entire season was hanging in the balance.

So when Steve Harper saved Phil Bardsley's 94th-minute effort, Bruce had every reason to believe that much of his good work was unravelling. Much of the patient rebuilding he has overseen in the last 18 months, undone by a double derby disaster.

Sometimes, though, fate has a strange way of making its presence felt. Harper's save sent the ball careering back into the penalty area, a fortuitous Asamoah Gyan got in the way of it, and the rebound looped back over Harper and into the roof of the net.

Cue pandemonium at the Stadium of Light, and a result that could yet propel Sunderland into genuine European contention in the final four months of the season. If nothing else, it ensures an environment where the campaign as a whole can still be interpreted as a success.

Even the most ardent Black Cats fan would struggle to say it was deserved, but sometimes football is like that. Sunderland underperformed dramatically for the second derby in a row, but were jubilant at the final whistle. Newcastle were the dominant side for the majority of a typically frenetic game, but their players trudged off disconsolately at the end. All is fair in love and derbies.

For the visitors, however, the despondency that accompanied Gyan's equaliser should not eclipse the pride that was earned in the preceding 93 minutes.

Just as they had dictated proceedings at St James' in October, so they bossed matters again at the Stadium of Light.

In the polished Fabricio Coloccini and the unexpectedly powerful Shola Ameobi, Newcastle boasted comfortably the two best players on the field.

Coloccini was imperious throughout, winning everything in the air and neutering Gyan to the extent that when he grabbed his last-minute equaliser, it was a shock to find the African was still on the field.

Ameobi was fantastic up against former team-mate Titus Bramble, bullying the normally reliable central defender throughout and winning countless flick ons and knock downs. As was the case at Wigan a few weeks ago, Ameobi ensured the injured Andy Carroll was not missed.

As a result, once a frenetic opening period saw chances missed at both ends, Newcastle held the upper hand for the best part of an hour, playing the slicker passes in midfield, creating the better opportunities in the final third and restricting Sunderland to a handful of chances as the hosts played far too many long balls in the direction of Darren Bent.

Sunderland's players did not seem quite as overawed as they had appeared during their Halloween horror show on Tyneside, but they were not far off. The likes of Jordan Henderson, Ahmed Elmohamady and Steed Malbranque have performed impressively for most of the season. In both derby matches, however, they have been easily outclassed.

Once again, Nolan and Joey Barton pulled the midfield strings, and the latter almost created an opener inside the opening three minutes.

His through ball with the outside of his foot was inviting, but after peeling behind a hesitant Bramble, Ameobi slotted his first-time effort wide.

Not to be outdone in a chaotic opening period, Sunderland duly swept to the other end of the field and created a golden opportunity of their own.

Malbranque found Bent, the England international gracefully turned inside Coloccini, but his searing drive was too close to Harper and the Newcastle goalkeeper saved effectively with his legs. One chance each, not even six minutes gone.

It was two chances apiece by the 18-minute mark, but still the scoresheet remained blank, largely thanks to some impressive defending.

First, a razor-sharp Kieran Richardson cleared Coloccini's goalbound effort off the line, after the Argentinian defender had capitalised on Alan Smith's headed knock-down from Barton's corner.

Then, at the other end, Harper displayed impeccable reflexes to turn Malbranque's low effort around the left-hand upright after the Newcastle defence had been unpicked by a well-worked short corner routine.

Smith's departure with an ankle injury midway through the first half threatened to disrupt Newcastle's rhythm, but Danny Guthrie's appearance as a substitute failed to knock the visitors out of their stride, and they ended the opening period strongly as Ameobi headed Barton's corner over the crossbar.

Bent spurned arguably Sunderland's best opening four minutes after the interval, chipping wide after Phil Bardsley's through ball sent him scampering down the inside-left channel, and three minutes later, Newcastle were ahead.

Ameobi beat everyone to win Barton's corner at the back post, the ball hit Bramble in the back, and a loitering Kevin Nolan back-heeled home from two yards.

Ameobi has claimed the goal, jokingly questioning how much contact Nolan made, but it is hard to imagine Newcastle's captain losing his fourth derby goal of the season. There are plenty of illustrious figures on both sides of the Wear-Tyne divide who would have killed for a record like that.

Buoyed by their opener, Newcastle carved out a succession of chances to extend their lead, but failed to convert any. Leon Best failed to reach Jose Enrique's inviting low cross, Ameobi wasted a clear-cut opening with a piece of poor control, Jonas Gutierrez curled just past the right-hand post.

Enrique wasted the visitors' final opportunity, hammering a half-volley over the crossbar with nine minutes left, but the Magpies' profligacy did not look like proving costly as injury-time approached.

Sunderland struggled to build up a head of steam, but with the officials adding five minutes of stoppage time, there was to be a dramatic sting in the tail.

There was a huge element of fortune about Gyan's strike, but Sunderland gambled by throwing men into the box, and ultimately their adventure paid off.

Nolan (52, back-heeled in from close range after Ameobi's header deflected off Bramble)

1-1: Gyan (90, ball rebounded off the striker after Harper had saved Bardsley's long-range shot)

6 Gordon: Was hampered by a crowded box when Nolan scored, but generally commanded his area fairly well

5 Onuoha: Didn't give a lot away against Gutierrez, but on the flip-side, failed to offer anything going forward

4 Bramble: Out-muscled by Ameobi throughout and was nothing like the unflappable player that has led the line this season

4 Ferdinand: Failed to get close enough to either Ameobi or Best and was all at sea when Newcastle went long

6 BARDSLEY: Was Sunderland's best defender throughout and set up the equaliser with a long-range strike

4 Elmohamady: Seemed to suffer a bout of stage-fright and wasted a number of decent openings with some poor crosses 4Henderson: Went missing for large periods and failed to stamp any kind of authority on the midfield battle

4 Richardson: Did nothing to suggest he deserves a longterm run in his former position at the heart of midfield

5 Malbranque: Created the occasional decent opening, but let himself down with a string of misplaced passes 5Bent: Started brightly with a handful of decent runs, but wasted the two decent openings that came his way

4 Gyan: Had offered little or nothing as an attacking presence before his fortuitous last-gasp equaliser

6 Harper: Made a useful first half save from Bent and was unlucky with Gyan's late equaliser

Simpson: Kept Malbranque quiet for large periods and was a dangerous attacking force on the overlap

8 COLOCCINI: Won just about every challenge he went into and continued the dominant form he has displayed all season

6 Williamson: Started alarmingly slowly, but turned his performance around and did well in the second half

7 Enrique: Another rampaging display from left-back full of committed tackles and wholehearted runs

6 Barton: Produced a disciplined performance on the right and delivered a string of dangerous set-pieces

6 Smith: Had started brightly at the heart of midfield before a poor tackle from Richardson forced him off

7 Nolan: Made it four goals in two derby games this season and ensured Newcastle dominated the heart of midfield

6 Gutierrez: Took the game to Sunderland with a series of dangerous runs, even if his delivery remained mixed

5 Best: Couldn't get to the pace of the game at all before the break, but improved in the second half

Guthrie (for Smith 36): Slotted into the heart of midfield effectively and ensured Smith was not really missed 6 Lovenkrands (for Best 89) Gosling (for Gutierrez 90)

MAN OF THE MATCH

FABRICIO Coloccini The Newcastle centre-half led the line superbly throughout and will be a strong contender for the club's Player of the Season.