Cristian Riveros joins Kayserispor on a year-long loan from Sunderland 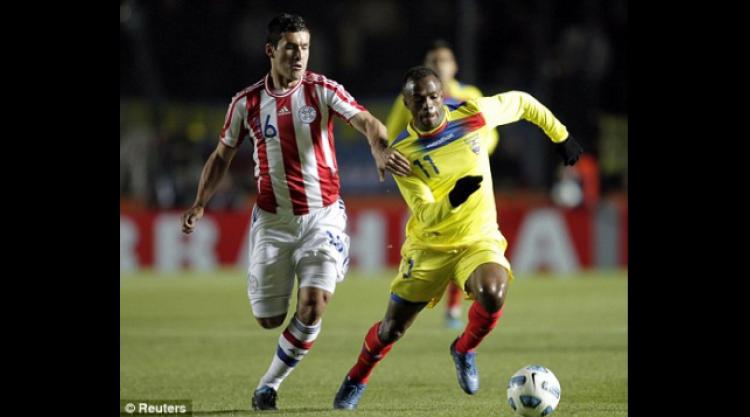 Sunderland have confirmed that Paraguay international midfielder Cristian Riveros has joined Turkish club Kayserispor on a year-long loan deal after just one season in the North East.

Riveros, who arrived on Wearside on a free transfer from Mexican outfit Cruz Azul last summer when he signed a three-year contract, has made just 14 appearances for the club, only seven of them in the starting line-up.

Manager Steve Bruce said: 'Cristian wants to play regular football and hopefully he will be able to do so in Turkey. We wish him all the best.'

Heading for the exit: Paraguay's Cristian Riveros will join Kayserispor on loan

Bruce has enjoyed significant success in the past with recruits from central and South America, but has seen Riveros, compatriot Paulo da Silva and Argentinian defender Marcos Angeleri find the going tough on Wearside.

Riveros is one of a series of players the club will look to move on this summer, either permanently or on loan, as Bruce makes room for his summer signings.

Six new faces, including Ahmed Elmohamady, who spent last season on loan at the Stadium of Light, have already arrived this summer, and the Black Cats are not finished yet.

They are still pursuing Manchester United trio Wes Brown, John O'Shea and Darron Gibson and have made significant progress with the former pair.

Indeed, Bruce is hoping to hold talks with Brown this week as his attention shifts from his attacking options to his defence

Brown and O'Shea both have experience and versatility and the manager believes they would significantly strengthen his options at the back.

Meanwhile, sources on Wearside remain relaxed over suggestions that Italian side Udinese could launch a bid for their former striker Asamoah Gyan.

Staying put: Sunderland say they have not had any bids for striker Asamoah Gyan and will not welcome any

The Ghana international has previously been linked with Tottenham and his agent, Fabien Piveteau, has suggested there is at least one bid on the table.

However, Sunderland are adamant they have had no offers and are not inviting any.