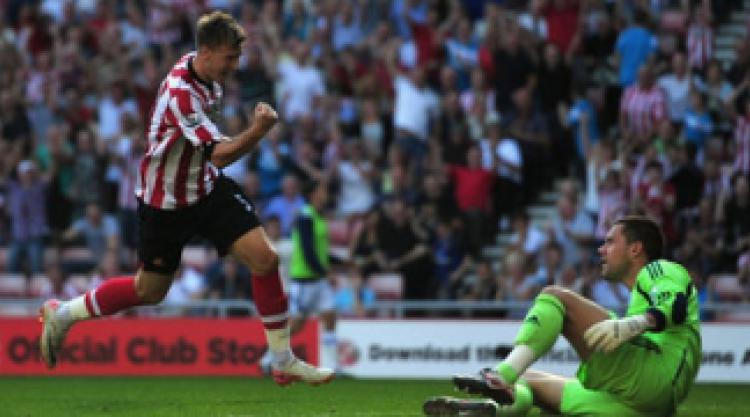 Sunderland came from two goals down to earn a 2-2 draw against West Brom that spared Steve Bruce the wrath of the fans at the Stadium of Light.

Bruce was firmly in the firing line after his side conceded twice within a catastrophic opening five minutes as James Morrison and then Shane Long got West Brom off to a dream start.

But as a chorus of "Bruce out" rang around the Stadium of Light, his players responded to drag themselves back from the brink of disaster.

Nicklas Bendtner gave them hope with a 24th-minute strike, his first for the club, and Ahmed Elmohamady followed suit within two minutes in a chaotic first half.

A rejuvenated Sunderland enjoyed the better of the game from that point on, but were unable to make the pressure tell and had to make do with a point on a day when three were perhaps what was required.

Both sides have now won just one of their seven Premier League games to date this season, and while there was a certain degree of relief among the home sections of a crowd of 34,815, there was a realisation too that things must improve markedly if they are to achieve their ambitions.

Bruce went into the game having endured the kind of week which is the stuff of nightmares for a football manager.

A poor display at Norwich on Monday night ended in a 2-1 defeat which piled the pressure back on the former Manchester United defender, and the fall-out from Titus Bramble's arrest over allegations of sexual assault and possession of a class A drug barely 24 hours later did little to ease his pain.

By 3.05pm, he could have been forgiven for started to contemplate the fate his most vociferous critics have been demanding for several weeks.

A must-win game in the eyes of many could hardly have started in any more depressing fashion for Bruce when Morrison, one of the smallest men on the pitch, was allow to meet Chris Brunt's fourth-minute free-kick unchallenged to head home from close range.

However, it was to get much, much worse for Sunderland within seconds as a kind richochet in midfield set free Long, who took full advantage of a flat-footed home defence to slide the ball past Simon Mignolet to send a chorus of boos echoing around the Stadium of Light.

But as the dark clouds gathered on Wearside, Bruce's players belatedly summoned up the will to fight their way out of the mire.

As Craig Gardner and Lee Cattermole finally managed to make an impression in the middle of the field, the lively Stephane Sessegnon was able to make his presence felt and start to link with lone striker Bendtner.

They grabbed themselves a lifeline with 24 minutes gone when Sebastian Larsson back-heeled Sessegnon's pass into Bendtner's path and the Dane fired past Ben Foster with the help of a deflection off Gareth McAuley.

The on-loan Arsenal striker turned provider two minutes later when he crossed for Elmohamady to head home an equaliser which blew the game wide-open once again.

Having dragged themselves back into the contest, Sunderland had the impetus and went close to taking the lead in injury time when Foster had to beat away Gardner's shot on the turn.

But they continued to look fragile at the back with Wes Brown and Michael Turner struggling to keep Long and Peter Odemwingie at bay, and with Morrison and Brunt probing from midfield, the danger was far from over.

That said, the Black Cats should really have been in front within three minutes of the restart when Larsson floated a free-kick over Jonas Olsson's head to find Brown at the far post.

The former Manchester United defender seemed surprised to see Larsson's cross reach him and having reacted late, headed it down into the turf and harmlessly over the bar.

Elmohamady too might have done better with 59 minutes gone with Sessegnon once again the architect.

The Benin international cut inside from the left and rolled the ball into the Egyptian's path into the box, but Foster's positioning was perfect to make a vital block.

West Brom were retreating ever deeper into their own half as Sunderland assumed control with Sessegnon terrorising the visitors' back four, although at times over-elaborating.

But with the home side running out of steam, it was the visitors who finished the stronger, although without ever really threatening to snatch victory.