Jonathan Walters double sends the Republic of Ireland to Euro 2016 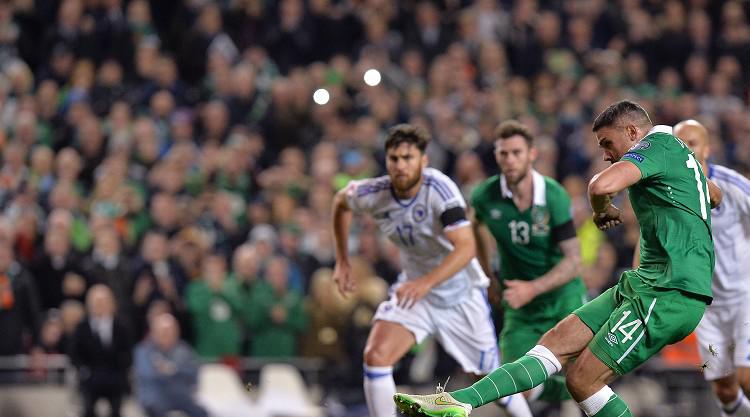 Jonathan Walters blasted the Republic of Ireland into the finals of Euro 2016 as his double ended Bosnia-Herzegovina's hopes of a trip to France next summer.

Six years to the week after Irish hearts were broken by the unseen Thierry Henry handball which cost them a place at the 2010 World Cup finals, the Republic benefited from an equally suspect decision against unfortunate defender Ervin Zukanovic which allowed Walters to open the scoring from the spot.

But the game remained in the balance until the Stoke frontman dispatched a volley past former team-mate Asmir Begovic 20 minutes from time to wrap up a 2-0 win on the night and a 3-1 aggregate victory.

Ireland will take part in a second successive European finals tournament having qualified via the play-offs, an achievement which will extend manager Martin O'Neill's existing contract and surely make the agreement of a longer-term deal which is understood to be on the table a formality.

O'Neill was always likely to restore Walters to his starting line-up after suspension, but not risk either John O'Shea or Shane Long from the start after their battles for fitness, and that was the only change in personnel as full-back Stephen Ward made way from the XI which started in Zenica.

However, it was his decision to employ Robbie Brady at left-back rather than in the midfield role he occupied in Bosnia which was to pay dividends before the break.

Brady's attacking instincts and pace helped to limit the influence of winger Edin Visca, who had led the Republic a merry dance at the Bilino Polje Stadium, although he was wasteful from a series of set-pieces in promising areas from which he too often managed to find only the first defender.

Where Ireland had contained in Zenica, they set out looking to attack on home soil with Begovic blocking one Brady cross with his legs and Zukanovic heading another away as the home side prospered down the left.

However, O'Neill's men were handed a stroke of good fortune when Dutch referee Bjorn Kuipers ruled that Zukanovic had handled Daryl Murphy's cross to the defender's horror and, it must be said, the surprise of most of those present.

But Walters was not about to pass up the opportunity, sending former Stoke team-mate Begovic the wrong way to give the Irish a 24th-minute lead.

Bosnia responded in positive fashion and Edin Dzeko drilled a low effort into the side-netting two minutes later and midfielder Haris Medunjanin might have done better 13 minutes before the break when he skied his shot from Dzeko's knock-down.

Mehmed Bazdarevic made a change at the break when he replaced midfielder Edin Cocalic with the more attack-minded Muhamed Besic, and Ireland found themselves under genuine pressure as the second half unfolded.

Medunjanin shot straight at Randolph from distance and Dzeko unwittingly blocked a Visca effort on its way towards goal before defender Ciaran Clark was relieved to see his header from a curling Medunjanin free-kick only just clear his own crossbar.

Senad Lulic miskicked in front of goal after Visca had escaped Brady's attentions with 54 minutes gone, and O'Neill moved to arrest the slump by replacing Wes Hoolahan and Murphy with James McClean and Long.

Play moved swiftly from end to end, but Bosnia were looking the more threatening and Miralem Pjanic saw a 60th-minute snapshot blocked at source after Medunjanin had picked him out with a clever free-kick.

But the Republic extended their lead with 20 minutes remaining when, after he had been felled agriculturally by defender Emir Spahic, Walters was on hand to volley home from beyond the far post after Ognjen Vranjes could only help on Brady's swinging free-kick.

Substitute Vedad Ibisevic rattled the bar with a flying injury-time volley, but Ireland had done enough.