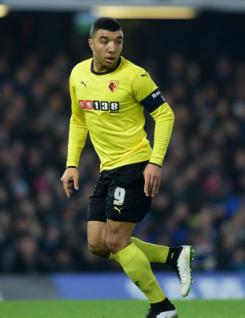 Troy Deeney is a young striker who joined Watford on the eve of the 2010-11 seaon, making his debut for the Hornets when he came on as a substitute in the opening game at Norwich. Troy began his career with non-league Coleshill Town and joined Walsall in December 2006, signing professionally the following March. Initially seen as a wide right midfielder, he became a regular in the side during the latter part of the 2008-09 season when played in his favoured position up front. Troy was a near ever-present for the Saddlers in 2009-10 when he finished as the club?s leading scorer with 14 goals, and was a regular in the matchday squad for the Hornets in 2010-11, featuring up front and also occasionally on the right of midfield.