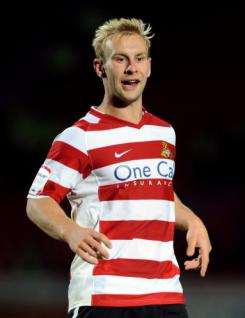 Diminutive midfielder Simon Gillett signed for Doncaster Rovers in the summer of 2010 from Southampton, where he had spent five seasons. Simon had impressed with his skilful reading of the game and his tackling during a loan spell in 2009-10 and fitted easily into the Rovers' style. Despite being sent off in the opening day win at Preston, Simon played a key role in midfield, keeping skipper Brian Stock out of the side and scoring his first Rovers goal at Watford. Unfortunately he suffered a knee ligament injury in November and then had further problems when he returned to training in January. However, he was back in the side in March and made some handy contributions to Rovers' ultimately successful battle to retain their Championship status.