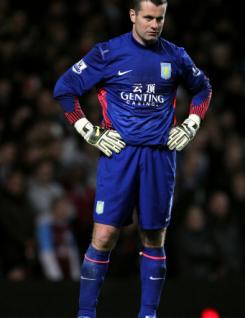 Shay Given is an experienced goalkeeper who was on the books of Manchester City in 2010-11. He was an ever-present in Premier League games from his arrival at Eastlands in February 2009 until the start of the 2010-11 season, producing several Man of the Match performances for the Blues. His consistent form enabled City to reach the semi-finals of the Carling Cup and challenge for a top-four position in the Premier League. However, the development of Joe Hart caused manager Roberto Mancini to select the younger ?keeper as his first choice for 2010-11. Shay started his career as a youngster with Celtic, then had a spell with Blackburn, but it was only when he signed for Newcastle United in 1997 that his career began to take off. He spent 12 years on Tyneside, making over 350 appearances for the Magpies. Shay won his first cap for the Republic of Ireland against Russia in March 1996 and is now his country?s most capped player. In July 2011 Shay left Eastlands and signed for Aston Villa.