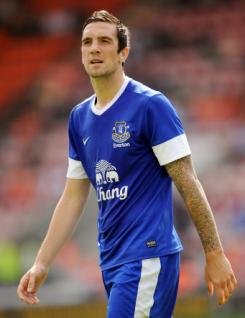 Shane Duffy is a young centre back on the books of Everton. After arriving at Goodison from Foyle Harps in November 2008 as a first-year scholar, Shane became a reserve team regular and is now on the fringes of the first-team squad. A tall defender who is good in the air, Shane impressed the Everton fans with his mature performances for the first team in Europa League games against AEK Athens and BATE Borisov in 2009-10. Shane again featured for the reserves in 2010-11 when he added a further senior appearance on loan to Burnley. In August 2011 he joined Scunthorpe United in a short-term loan. Shane represented Northern Ireland at all levels to U21, but then switched his allegiance to the Republic of Ireland, for whom he has also appeared at U21 level.