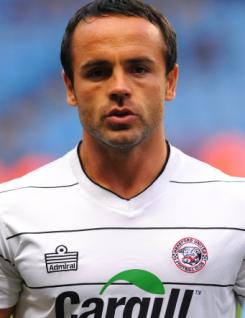 Ryan Green is an experienced defender who returned to Hereford United in the summer of 2009 for his second spell with the Bulls. Ryan is most at home at right back but has also appeared in the centre of defence. He started his career at Wolverhampton Wanderers and by the time he made his League debut at the age of 18 he had already played for Wales. Ryan was just 17 when he first appeared for his country and at the time was the youngest player to be capped by Wales. He only gained one further full cap and since leaving Wolves has appeared for a number of clubs. Ryan had a three-year spell at Hereford scoring the goal that earned the club promotion back to the Football League in 2006 and came back to Edgar Street after a couple of seasons at Bristol Rovers. Ryan was a near ever-present in the Hereford line-up during 2010-11.