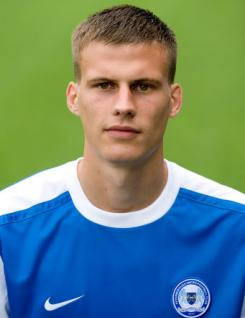 Ryan Bennett is a centre back who signed for Peterborough United in the January 2010 transfer window after a successful spell on loan from Grimsby Town. Ryan is a tall, composed defender who is powerful in the air and good on the ball. He established himself as a regular in the Posh team during 2010-11, with his season culminating in an appearance in the League One play-off final. Ryan also took the award as Young Player of the Year. He developed in the youth team at Grimsby Town and while with the Mariners he won representative honours for England U18s. He went on to become a first-team regular and was appointed captain while still a teenager.