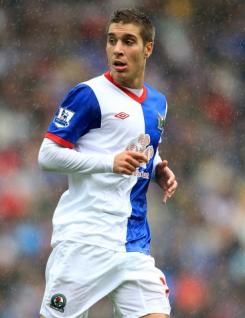 Ruben Rochina is a young striker who signed for Blackburn Rovers in the January 2011 transfer window. Ruben had developed in Spain with Barcelona where he had played for the club?s B team. Even though he was at Ewood Park for only part of the season, he led the scoring for Rovers? reserve team, his tally including a superb left-foot strike in the Premier Reserve League Northern Group play-off against Manchester United. Ruben made his first-team debut as a substitute at Fulham in March and added further appearances before the end of the season.