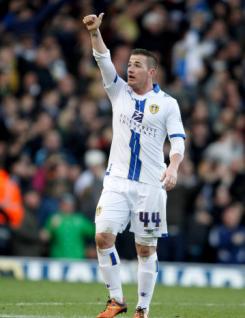 Ross McCormack is a busy Leeds United striker who makes things happen in the danger zone. Ross joined United shortly after the start of the 2010-11 campaign, but found competition for places at Elland Road tough. He was often on the bench or playing in the reserves, but came good at the very end of the campaign, featuring in the line-up for the final two games and scoring on both occasions, his first goals for the Whites. Ross was previously with Cardiff City where he had finished as leading scorer in the 2008-09 campaign. Ross began his career with Rangers and later played for Motherwell before moving south.