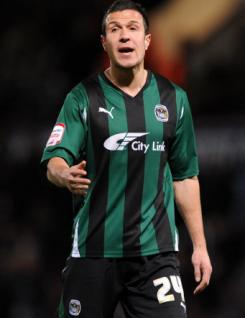 Richard Wood, a big signing by Coventry City in January 2010, was out of favour at the start of 2010-11 but was recalled to the first team weeks into the season. He quickly built a strong central defensive partnership with Ben Turner and their displays were a significant factor in the team's success in the early autumn. Strong in the air and in the tackle, the former Owl gives the Sky Blues defence an authority. He reads the game well and has a turn of speed surprising for a tall man. Later in the season he did well playing in the troubling left-back position, but ended the campaign on the bench after losing his place to Martin Cranie.