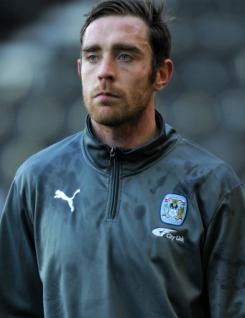 Richard Keogh had an outstanding first season with Coventry City following his move from Carlisle in the summer of 2010. He played in every minute of every League game - the first Coventry player to do so for over 10 years. His rampaging runs down the flank and his solid defending endeared him to the Sky Blues? fans and he deservedly won some of the key Player of the Year awards, including the club's own award. His versatility knew no bounds and in the last third of the season, after an injury crisis amongst central defenders, he switched roles and played so well he kept Richard Wood on the sidelines. Especially dangerous coming up for corners Richard went close with headers on numerous occasions before finally scoring his first goal for the club at Norwich on the last day of the season.