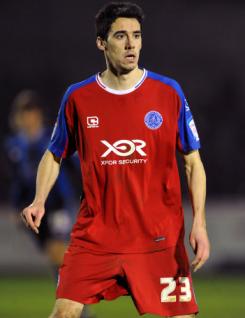 Peter Vincenti is a striker who signed for Aldershot during the January 2011 transfer window. He went on to feature regularly for the Shots during the remainder of the campaign, netting six goals. Peter began the 2010-11 season with Stevenage and had the distinction of scoring the club?s first-ever Football League goal when he netted against Macclesfield Town in the opening game. However, in October he joined Conference club Mansfield Town on loan. Peter developed in the Jersey FA Centre of Excellence and played for localsenior team St Peter FC. He represented the Island at U18 and U21 as well as the senior team and was Jersey's Player of the Year before signing for Millwall in August 2007. Peter's only experience of first-team football at the New Den was a single inclusion as an unused substitute and in January 2008 he moved on to Stevenage.