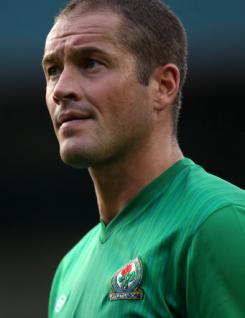 Paul Robinson is currently first-choice goalkeeper for Blackburn Rovers. A commanding ?keeper who dominates his box, he is a great shot stopper who offers a calm and composed presence as the last line of defence. Paul arrived at Ewood Park during the 2008 summer transfer window, becoming then manager Paul Ince?s first signing. Since then he has been a near ever-present in the line-up and has now made over 120 Premier League appearances for Rovers. His consistent performances earned him the club?s Player of the Year award for 2010-11. Paul, who was previously with Leeds United and Tottenham, won 41 caps for England between 2003 and 2007.