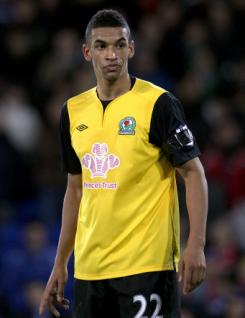 Nick Blackman is a promising young striker who signed for Blackburn Rovers in January 2009. Nick began his senior career with Macclesfield Town, making his senior debut at the age of 17 before his transfer to Ewood Park. A tall, rangy striker who holds the ball up well, he gained further experience of senior football with spells on loan at Blackpool and Oldham. In 2010-11 he extended his education in the game by spending most of the season on loan in Scotland playing for manager Craig Brown, firstly at Motherwell and then Aberdeen. He was particularly successful during his time at Fir Park, where his tally of 10 goals left him as the team?s leading scorer for the season and included a hat-trick in the 4-0 win over St Johnstone in November.