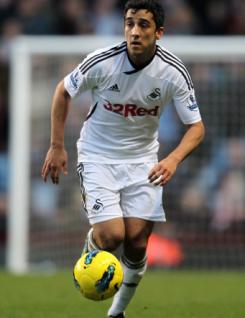 Neil Taylor is a left-footed left back who signed for Swansea City in the summer of 2010. Neil is an effective defender who also has the ability to get up and down the flank to support his winger. He was at Manchester City as a youngster before joining Wrexham and went on to make his senior debut for the North Wales team. Neil made his international debut for Wales while at the Racecourse ground and following his move south he appeared regularly in the Swans? promotion winning team.