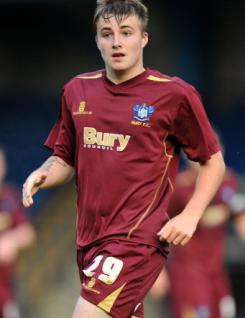 Max Harrop is a young midfield player who spent 2010-11 as a second year as a scholar with League Two club Bury.&nbsp; Max was included on the first team bench in 2009-10 and in 2010-11 he went a stage further in his development making his Football League debut at Port Vale in March.&nbsp; Max added a couple more appearances from the bench before the end of the season. At the campaign he was rewarded with the Bury youth team player of the season award.&nbsp; Max is a player who likes to get forward from his midfield position and has an eye for goal. He was with Liverpool's Academy as a schoolboy before starting out as a scholar at Gigg Lane at 16.