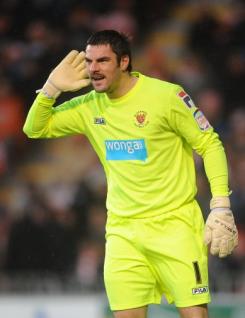 Matt Gilks is a goalkeeper who signed for Blackpool during the 2008 close season. He was mostly second choice to Paul Rachubka in his early days at Bloomfield Road, and was again on the bench at the start of the 2009-10 campaign before taking over the jersey in the second half of the season as the Seasiders gained promotion with a play-off final victory over Cardiff. Matt retained his place for the start of the club?s Premier League campaign but was then sidelined after suffering a knee injury against West Ham in November. However, he returned to action before the end of the season.