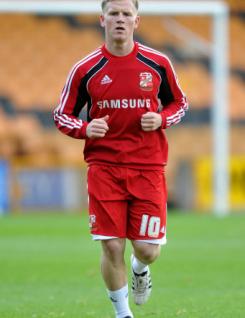 Matt Ritchie had a brief loan period at Swindon Town during 2009-10 then returned to the County Ground on a loan deal from Portsmouth during October 2010 and was signed on a permanent basis the following January. Matt was a consistent performer throughout the season who was involved in every game following his permanent move, and it was no surprise that he was selected as the club's Player of the Year. He is predominantly a left winger but can operate down either flank, behind the front two or further forward. Matt had previously done well in loan spells with Dagenham &amp; Redbridge and Notts County and began 2010-11 in the Portsmouth line-up before losing his place.