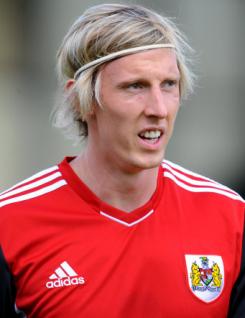 Martyn Woolford is a left winger who signed for Bristol City in the January 2011 transfer window. He went on to make a number of appearances for City in the second half of the campaign as he began to settle in at Ashton Gate. He is a direct player with plenty of skill and pace, and has the useful knack of being able to score crucial goals. He was previously with Scunthorpe United for whom he netted the winner in the League One play-off final against Millwall at the end of the 2008-09 season. Martyn is from a sporting family and both his father and grandfather played rugby league for Featherstone Rovers.