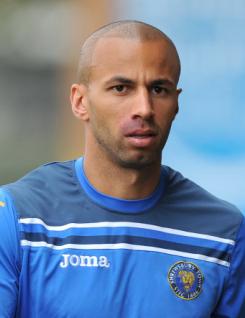 Mark Wright is a goalscoring right winger with Shrewsbury Town. Mark began the 2010-11 season with Bristol Rovers but was sent out on a six-month loan to the Shrews. He made an instant impression with his new club, scoring two in a 4-0 win at Stockport County as the team settled into the upper echelons of League Two. A run of eight goals in eight games in November convinced Shrewsbury to sign him on a permanent basis as soon as the transfer window re-opened. A highlight was his performance against Hereford, when he netted a hat-trick, one of the strikes being a tremendous curling effort which won the club?s Goal of the Season award. Mark ended the campaign as the Shrews? leading goalscorer with 14 goals.