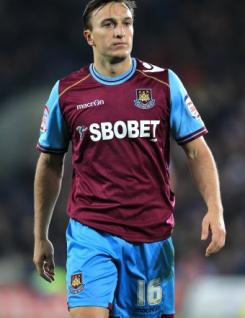 Midfielder Mark Noble is West Ham United?s longest-serving player with over 100 appearances for the Hammers. He joined the club as a youngster and made his reserve debut aged 15. Mark went on to make his senior debut in 2004 and has since established himself in the team as a busy attack minded player. Although he had injury problems in 2010-11 he still featured regularly in the team and has now played over 150 competitive games for the club. Mark won 20 caps for the England under-21 team.