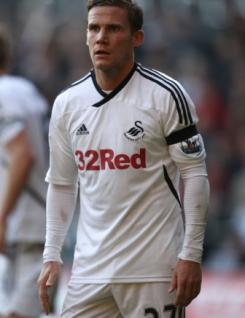 Mark Gower is an experienced midfield player who signed for Swansea City in the summer of 2008. Although he joined the club as a winger he has since converted to a central midfield holding role. Mark featured regularly for the club throughout 2010-11 with his passing skills combined with his experience proving key to the team. Mark is a former Tottenham trainee who went on to play for Barnet and Southend United before joining the Swans.