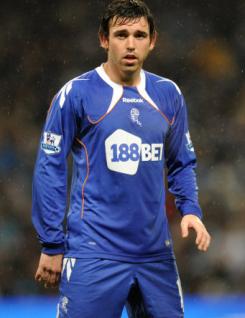 Mark Davies is a midfield player who signed for Bolton Wanderers in January 2009. A product of the Wolves youth set-up, Mark spent four-and-a-half seasons at Molineux where his progress was often hampered by injuries. A playmaker in the centre of the park, he was superb in his home debut for Wanderers against Tottenham and enjoyed a good run in the team before injury led to a spell on the sidelines. Since then he has been in and out of the side, often featuring as a substitute. Mark netted his first-ever Premier League goal against Blackpool in November, finishing off a superb flowing movement from close range to score what was later selected as Wanderers? Goal of the Season.