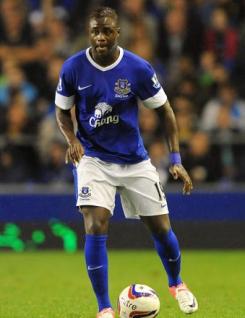 Magaye Gueye is a young attacking player who signed for Everton in July 2010. Although he is best known as a pacy striker, Magaye can also play wide on the wing. He began his career with RC Strasbourg and a useful scoring record in 2009-10 persuaded Toffees? manager David Moyes to step in and sign him. Although regularly on the bench it was not until April that he made his Premier League debut and he then had a brief run in the side in the closing weeks of the campaign. Magaye has been capped for France at all levels from U16 to U21.