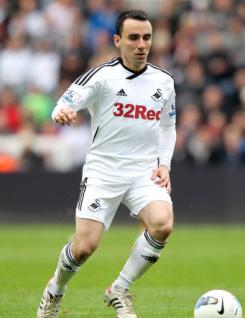 Leon Britton is a central midfielder who has made over 300 first-team appearances for Swansea in his first spell at the club before joining Sheffield United in the summer of 2010. Although Leon featured regularly for the Blades he chose to return to the Liberty Stadium just seven months later and went on to assist the Swans to promotion to the Premier League Leon originally joined Swansea on loan from West Ham in December 2002 and went on to sign a permanent deal with the club. A hard-running, strong tackling player, he was a key figure in the club?s rise up the divisions. A popular figure at the Liberty Stadium he was the club?s Players? Player of the Season in 2008-09.