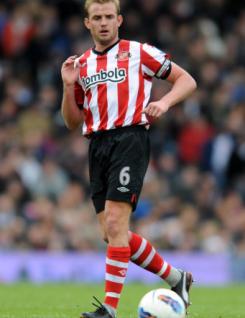 Lee Cattermole is a tough tackling midfielder who is currently team captain of Sunderland. Lee came up through Middlesbrough's youth system and made his Boro? debut against Newcastle United in January 2006. He made the switch to Wigan Athletic in July 2008 and became a regular during a season spent at the DW Stadium. Sunderland paid a substantial transfer fee to acquire Lee in August 2009, as he followed former boss Steve Bruce to the Stadium of Light in a permanent deal. Lee played in over half the Wearsiders? Premier League fixtures in 2009-10, despite suffering with a series of niggling injuries. He was appointed as the new team captain for the Black Cats in August 2010, replacing Lorik Cana, but after settling into the role further injuries sidelined him once more.