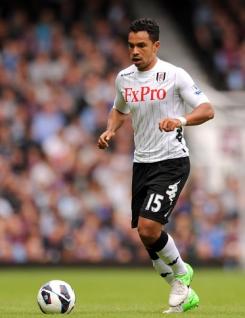 Kieran Richardson is a versatile defender or midfield player who signed for Sunderland in the 2007 close season. A product of the West Ham youth system, Kieran moved north to sign for Manchester United as a youngster and made his full debut in October 2002 as a substitute during a Champions' League tie against Olympiakos. Finding senior opportunities limited at Old Trafford, he joined West Bromwich Albion on loan during the second half of the 2005-06 season and played a major role as the Baggies dramatically avoided relegation from the Premier League. Since signing for Sunderland Kieran has made over 100 Premier League appearances for the club. Primarily a left-sided midfielder, he has also featured at left back and in a more central position in midfield under manager Steve Bruce, before signing for Fulham. Kieran scored twice on his debut for England against the United States in May 2005 and added a further seven caps, although his last international appearance came in November 2006.