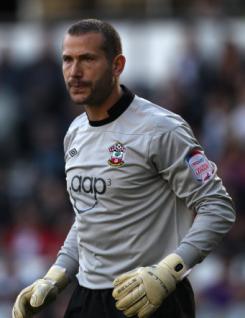 Kelvin Davis is Southampton?s club captain and has been first-choice goalkeeper since his arrival from Sunderland in July 2006. Kelvin made his League debut with Luton Town whilst still a trainee back in May 1994 and later featured for Ipswich and Wimbledon before joining the Wearsiders. Kelvin is a first-class shot stopper, quick off his line, a good communicator and popular with the St Mary?s crowd. He was the club?s Player of the season in 2008-09, while in 2010-11 he was selected by his fellow professionals for the PFA League One team of the season for the second consecutive year. A veteran of more than 500 senior appearances, Kelvin was capped by England at U18 and U21 levels earlier in his career.