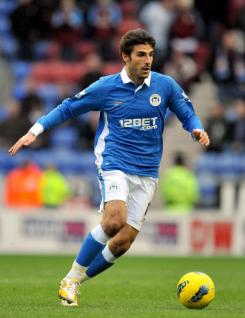 Jordi Gomez is a midfield playmaker for Wigan Athletic, having followed his former manager Roberto Martinez to the DW Stadium in June 2009. Jordi made his debut for the Latics on the opening day of the 2009-10 campaign, but has since struggled to hold down a place in the starting line-up. Jordi continued to add to his first-team appearance total in 2010-11 but was unable to establish himself as a regular in the team. He arrived at Wigan after spending 2008-09 on loan to Swansea City from the Spanish club Espanyol.