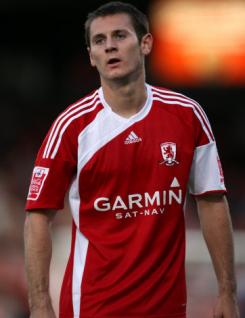 Jonathan Grounds is a left back who developed through the youth set-up at Middlesbrough to sign a professional contract in July 2007. Predominantly a left-sided defender, he can also play in central defence. His debut came in January 2008 when Middlesbrough drew 1-1 with Liverpool, a game in which Jonathan received widespread compliments for his performance. A calm and assured player, he is strong in the air and composed in his passing play. After several reserve team outings at the start of the 2010-11 season, Jonathan was loaned to Hibernian where he made a strong impression, returning to Middlesbrough in January.