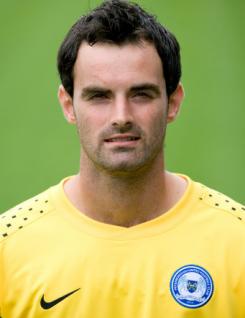 Joe Lewis is a highly rated goalkeeper who joined Peterborough United in January 2008. Joe provides a big physical presence at the back for Posh and has established himself as first-choice 'keeper at the club, missing just a handful of games. He was again a near ever-present in 2010-11 before suffering a knee injury in the first leg of the play-off semi finals which ruled him out of the final two games of the season. Joe began his career at Norwich City where he was included on the first-team bench as a 15-year-old schoolboy. He went on to develop in the academy at Norwich but never saw competitive first-team action and chose to move on. Joe has represented England at youth level and in the U21s, for whom his five caps include a brief appearance as a striker when he came on as a late substitute in a 7-0 win over Azerbaijan. He has also been included in the England senior squad on occasions but has yet to make his full international debut.