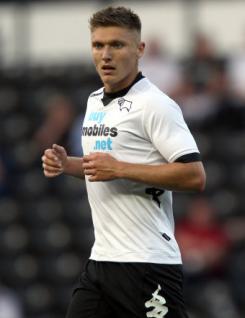 Jeff Hendrick is a young central midfield player who signed his first full professional contract for Derby County in the summer of 2010 after serving his time as a scholar with the Rams. Jeff featured regularly in the academy and reserve teams during 2009-10 and was included in the first-team squad as an unused substitute for the final game of the season. He continued to feature for the reserves in 2010-11, and from November he was included on the first-team bench on a number of occasions. He made his Football League debut when he came on as a substitute against Burnley in April and gained further senior experience in the remaining three games of the season. Jeff represented the Republic of Ireland at U17 and U18 before making his U19 debut in August 2010. He featured regularly for his country during the season earning 13 caps as the team fought their way through the qualifying stages of the UEFA U19 tournament to reach the semi-finals.