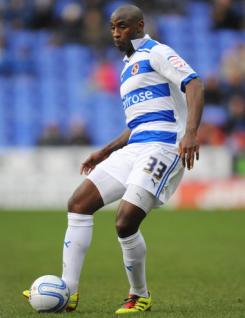 Jason Roberts is a big, powerful centre forward for Blackburn Rovers. Strong and robust he is a hard working player with a useful eye for goal. Jason began his senior career in the Conference with Hayes and then had a spell with Wolves without making the first team, but went on to develop a reputation as an effective striker in spells at Bristol Rovers, West Brom and Wigan. He arrived at Ewood Park in the summer of 2006 and after some injury problems in his first season he went on to build a useful striking partnership with Roque Santa Cruz. Since then he has remained a regular in the matchday squad, although often featuring on the bench. Jason has represented Grenada at international level and played in all three of his country?s qualifying games for the 2010 World Cup. In 2007 he established the Jason Roberts Foundation, a charity promoting football programmes for young people in the UK and Grenada, while he was awarded the MBE in the 2010 New Year?s Honours List for his charitable work.