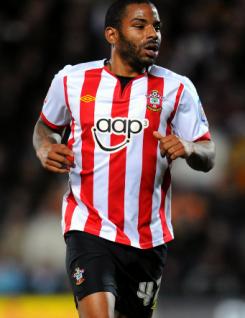 Jason Puncheon came to Southampton from Plymouth Argyle in January 2010 ? although he was actually on loan to MK Dons at the time of his transfer. He provides a quick, darting presence, happy to taunt defences from midfield or as an outright attacker. Jason started out as a trainee with the Dons when they were still Wimbledon, but his reputation as a League player was made with Barnet, and three loan periods with MK Dons after joining Argyle. Jason began the 2010-11 campaign in the Saints? line-up, but fell out of favour and after moving on loan to Millwall in November he spent most of the remainder of the season out on loan. He netted a New Year?s Day hat-trick for the Lions against Crystal Palace and at the end of January joined Premier League club Blackpool where he spent the second half of the season before returning to St Mary?s once more.