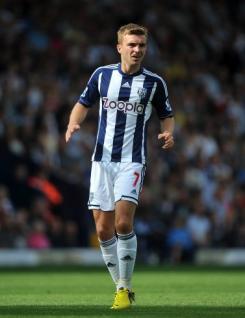 James Morrison is a versatile midfielder who signed for West Bromwich Albion in August 2007. Although his early years were spent as a winger he has developed into an attacking centre midfield player with a sure touch on the ball. James made an immediate impression at The Hawthorns, quickly becoming a first-team regular and winning Albion's Goal of the Season award for 2007-08 for his strike against Blackpool. Towards the end of the following season he was sidelined with an injury and it was almost 12 months before he returned to first-team action. James was restored to the line-up in 2010-11 and once again became a key player in the side. He is a graduate of the Middlesbrough Academy and made his debut for Boro as a 17-year-old. He went on to gain a UEFA Cup runners-up medal in May 2006 before joining Albion the following summer. James won his first cap for Scotland in May 2008 and added further appearances for his country in 2010-11.