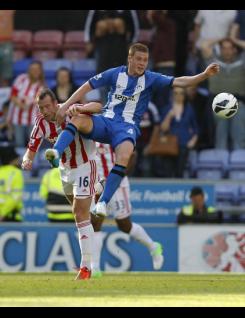 James McArthur is a young central midfielder who joined Wigan Athletic from Hamilton Academical. James is a solid tackler with good distribution skills. He made just three Premier League starts during 2010-11 but was regularly used from the bench. James made his debut for Hamilton as a teenager and completed over 100 appearances for the club before his move south. He is a former Scotland U21 international who earned a call-up to the senior squad making his debut against the Faeroe Islands in November 2010. James made further appearances for his country finishing the season with four caps.