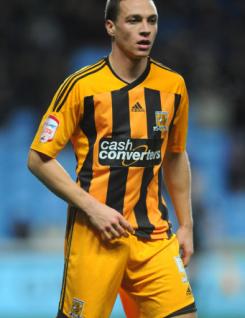 James Chester is a young centre back for Hull City who enjoyed a breakthrough season in senior football in 2010-11. He began the campaign on loan to Carlisle from Manchester United, establishing himself in the League One club?s line-up, before making a permanent move to Hull during the January transfer window. He forged a strong and effective partnership with loanee Anthony Gerrard in the heart of the Tigers? defence and was ever-present from the time he joined the club. James developed through the youth set-up at Old Trafford from the age of eight, earning a professional deal in the summer of 2007. The club?s Reserve Player of the Year for 2008-09, he made his debut for United in the Carling Cup semi-final against Derby in January 2009.