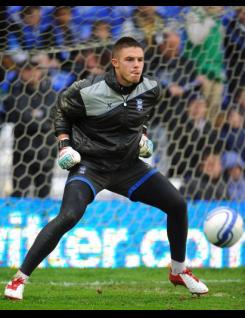 Jack Butland is a tall, young goalkeeper who signed his first professional contract for Birmingham City in March 2010. Jack was selected as the Blues? Young Player of the Year for 2009-10, and featured for the U18 and reserve teams in 2010-11. He has been a regular member of the England youth set-up and has represented his country at all age-group levels from U16s to U20s.