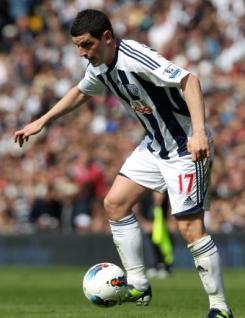 Graham Dorrans is an attacking midfield player who signed for West Bromwich Albion in July 2008. He is a good all-round midfielder, operating from box to box and with an eye for goal. Graham was eased in gently at The Hawthorns and it was not until December 2008 that he made his first-team debut. He went on to become one of the key figures in the 2009-10 promotion side when he was the Baggies? joint-top scorer and also won the Player of the Season award. He mostly retained his place in 2010-11, but missed the closing weeks of the season due to injury. Graham began his career with Livingston, where he made his senior debut in the SPL just days after his 18th birthday. He went on to play more than 70 first-team games before joining Albion. Graham won his first cap for Scotland against Japan in October 2009.