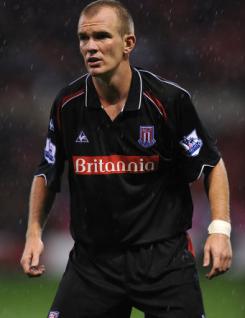 Glenn Whelan is a midfield playmaker who joined Stoke City midway through the 2007-08 season. He is a central midfield player with great vision and fine distribution skills. Glenn was a regular in the closing stages of the 2007-08 promotion season, but took time to establish himself in the line-up at Premier League level. He had a good run in the side during 2009-10, but was then back on the bench for much of the 2010-11 campaign, but returned to the side in the closing stages and was in the line-up for the FA Cup final defeat by Manchester City in May. He played as a youngster with the Dublin junior club Cherry Orchard then spent three years as a professional with Manchester City, but it was only when he dropped down to sign for Sheffield Wednesday that his career began to take off. He went to make over 150 appearances for the Owls before his move to Stoke. Glenn has now won over 30 caps for the Republic of Ireland.