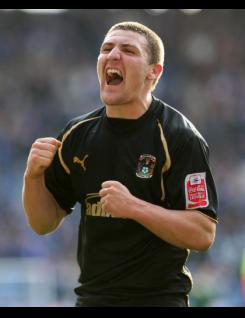 Gary Deegan is a young Irishman signed by Coventry City from Bohemians in January 2010. He had made a big impression in the 2009-10 season with his aggressive midfield play but a knee injury meant he missed almost all of the 2010-11 campaign. By the season's end he had recovered and sat on the bench several times before a brief substitute appearance on the final day at Norwich.