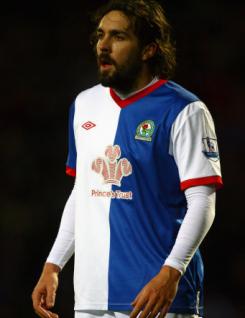 Gael Givet is a versatile defender who initially signed on loan for Blackburn Rovers in January 2009, making a permanent move during the summer transfer window. A consistent performer at left back since his arrival, Gael can also play in the centre of defence if required. He was rarely absent from the line-up in 2009-10, scoring his first-ever goal for the club with a fine effort in the 2-1 defeat at Sunderland and winning the Players? Player of the Year award. In 2010-11 he was again a regular, although niggling injuries occasionally kept him on the sidelines. Gael played his early football with AS Monaco (where he appeared in the 2004 European Champions? League final) and Marseille before coming to Ewood Park. He won 12 caps for France between 2004 and 2006, and was on the bench for the 2006 World Cup final when his country lost out to Italy in a penalty shoot-out.