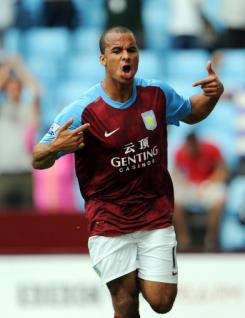 Gabriel Agbonlahor is an attacking player who is a product of the Aston Villa youth set-up. Gabriel made a scoring debut for Villa against Everton in March 2006, and since then he has become a fixture in the side, either on the right wing or as a striker. His lightning speed and deadly accuracy in front of goal mean that he is one of the most popular players amongst Villa supporters, while he has also added greater physical strength to his game. Proof of his all-round ability came in August 2009, when he scored a 'perfect' hat-trick against Manchester City, with left- and right-footed shots and a header. He also has the happy knack of scoring in big games - twice netting late winners in Villa's local derby against Birmingham City and grabbing the only goal of Villa's first League win at Old Trafford since 1983. Gabriel won his first cap for England against Germany in November 2008 and has added further appearances since.